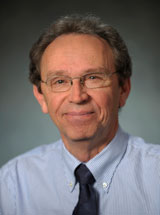 Dr. Dougherty's early research career focused on cardiovascular MR in which he made a significant impact. His 3D angiography and cardiac tissue tagging methods are standard components of clinical cardiovascular studies. In particular, the SPAMM method for studying cardiac function that he invented was one of the most successful patents that Penn licensed. With the publication of his paper on a 4 Tesla cardiac coil, he was the first to demonstrate the value of high-field cardiac imaging, which is currently used clinically. He continues to work in cardiac MR and collaborates closely with the Gorman Lab from Cardiothoracic Surgery, which uses imaging methods for the evaluation of new surgical methods.

Dr. Dougherty’s role in the Department of Radiology changed significantly over the last 5 years in that there was a much greater emphasis on clinical translation. He worked with Evan Siegelman, MD on develping innovative body imaging protocols, coordinated efforts between Siemens Medical and Ron Wolf, MD for MR neurography, assisted Max Itkin, MD in implementing a central lymphangiogram protocol, and in one of the most significant developments, worked with Jeff Maki, MD, Ph.D. from the University of Washington on the development of a periphaeral lymphangiography protocol, making Penn one of the few sites in the country capable of performing these studies. MR breast imaging continued to be a major focus and he worked closely with breast radiologists. In a major achievement, after 15 years of development and testing, the KWIC imaging method was adopted for clinical use in dense-breast screening studies, with the first clinical studies performed in November 2017. In an role outside of normal MR imaging, he was one of the physicists for the Exablate MR guided focused ultrasound project at Pennsylvania Hospital.

Rapid DCE-MR breast imaging using K-space Weighted Imaging Contrast (KWIC) has continued to be a successful line of research and has received attention from many clinicians from around the world. Siemens Medical Systems funded much of this work into 2016, particularly for the translation of the technology for clinical use.

In a novel line of investigation, Dr. Dougherty found that the underlying physics used in MR imaging can also be applied to mitigate cellular injury, such as from ionizing radiation or cardiac ischemic/reperfusion. He showed that electron spin control of chemical reaction rates can be used to protect cells from the harmful effects of free radicals. This has far reaching impact in commercial, industrial and medical applications and will be a major focus for Dr. Dougherty’ research over the next 5 years. This work, in collaboration with Keith Cengel, MD from Radiation Oncology, has led to a patent submission, which is pending, and the creation of Cellnetics, LLC, a company formed in partnership with the Penn Center for Innovation.

These examples show how Dr. Dougherty's work fits into the departmental mission. Through studies in which he is the principal investigator as well in a role as a collaborative scientist, new diagnostic tools have been developed, tested and moved into the clinical setting, ultimately for the benefit of patients. He has a consistent record of publications with 31 publications after his initial faculty appointment and has 3 publication in the four years following his last reappointment as Associate Professor. Publications have been limited in this period due to delaying publications as additional patent applications are anticipated for the magnetic field effect, and his greater focus on clinical translation. A paper on breast imaging is in submission and another on CT lung image registration is in preparation.

Dr. Dougherty has recently completed funded studies focusing on imaging of the breast with industrial support and also draws support from many grants indirectly in his role as a collaborative resource. This support comes from the Center for Advanced Magnetic Resonance Imaging and Spectroscopy (CAMRIS) where he reviews imaging protocols and assists researchers in the design and development of MR imaging methods. He has also been supported from royalty fees generated from the SPAMM patent.

back to top
Last updated: 02/05/2020
The Trustees of the University of Pennsylvania
Back to Top