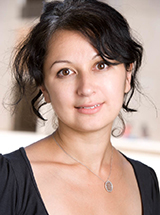 
We are interested in how the genome is organized inside the nucleus, and how this organization contributes to functional regulation of gene activity. Spatial organization is mediated by interactions between specific regions of the genome and protein components of nuclear structural scaffolds, such as the nuclear envelope. Entire chromosomes, large chromatin domains and specific genes have been reported to occupy particular places in the nuclear three-dimensional space, in a manner that is correlated with their expression status. Such organization represents a potentially widespread mechanism of gene regulation since specifying the relative position of the DNA template inside the nucleus could influence the probability or kinetics of all possible reactions that are carried out on that template, such as transcription, silencing or replication. Yet many of the basic principles of how particular genomic loci are targeted to and affected by distinct nuclear scaffolds remain obscure. Our goal is to understand how these interactions are determined, how they can change in development or disease states, and how they influence the establishment and inheritance of gene expression patterns.

Our research has focused on one of the most prominent components of the nuclear envelope, the Nuclear Pore Complex (NPC), which consists of proteins termed Nucleoporins (Nups) (Figure 1A). The NPC sets up a channel through the nuclear membrane that mediates all transport between the nucleus and the cytoplasm, including import of regulatory factors and export of mRNA. Yet in addition to their classical role as transport channels, NPCs have been proposed to regulate gene expression via direct binding to specific genomic regions and setting up nuclear environments that promote gene expression. One of the most striking examples of nuclear organization can be seen in electron microscopy images of mammalian nuclei, showing the non-random association of condensed chromatin with the nuclear envelope and de-condensed chromatin with the NPCs (Figure 1B). Our recent work utilized Drosophila as a model system and demonstrated that specific Nups bind to genes undergoing developmental activation and can functionally alter gene expression state. These findings have put forth an exciting possibility that the NPC plays a crucial and hitherto unknown role in direct regulation of developmental transcription programs, and have provided a unique system for unraveling the role of structural nuclear components in gene regulation.

We hypothesize that nuclear pores actively participate in the establishment and maintenance of gene expression domains through physical binding to specific regions of the genome and setting up tissue-specific organization in the nucleus. Being a transport complex, the NPC may couple these processes to other crucial aspects of gene regulation, such as import and correct targeting of transcription factors, and RNA processing and export. We utilize both cell biological and molecular genome-wide approaches to uncover the basic principles of genome interactions with the NPC in cell lines and in the organism (Figure 2).

Using Drosophila as a model system allows us to benefit from powerful genetics to dissect functional and developmental roles of the nuclear pore proteins and to reveal how the NPC is involved in active gene regulation. Mutations in many human Nups have been reported to lead to tissue specific pathologies, such as cancer, cardiac disorder and neural development, suggesting that Nups can similarly control mammalian gene expression and differentiation, and we plan to extend our findings to mammalian systems with the goal to provide novel mechanisms of disease etiology for Nup-related disorders. back to top
Last updated: 12/02/2019
The Trustees of the University of Pennsylvania
Back to Top