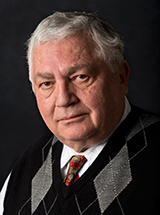 The major interest in my laboratory is to investigate the pathways for generation of reactive oxygen species and to understand their role in cell signaling and oxidant stress. Our current research is directed to the response of lung to altered blood flow, i.e., lung ischemia with or without reperfusion. These laboratory experiments represent a model for the effects of pulmonary embolism or associated with lung transplantation. We have shown that cell alterations with lung ischemia are not associated with tissue anoxia but rather represents the response to altered shear stress with activation of a signaling cascade that results in generation of reactive oxygen species and signaling for endothelial cell proliferation. An excessive response leads to oxidative stress manifested by tissue lipid peroxidation and associated biochemical changes. Studies are carried out predominantly with the isolated perfused lung model (rats and mice) and with a model of isolated endothelial cells that have been adapted in vitro to laminar flow. We have described several agents that can modify the acute response through scavenging of reactive oxygen species or inhibition of the signaling cascade.

A second area of active investigation is related to the structure-function relationships and physiological role of the protein, peroxiredoxin 6. The peroxiredoxins are a recently described family of antioxidant enzymes that for the most part function as thioredoxin peroxidases. But, peroxiredoxin 6 is unique as a bifunctional enzyme with both glutathione peroxidase and phospholipase A2 activities. Of importance, the enzyme can directly reduce phospholipid hydroperoxides thereby serving to repair the peroxidized cell membranes that are associated with oxidant stress. We have investigated the special features of the protein that permit phospholipid binding and subsequent hydrolysis or reduction of the bound substrate. We have shown that peroxiredoxin 6 through its peroxidase activity serves as a major anti-oxidant enzyme in the lung and also through its phospholipase activity participates in the normal turnover of lung surfactant phospholipids. A more recent finding is that the phospholipase A2 activity through generation of signaling products is required for the activation of NADPH oxidase in phagocytic cells and endothelium. Understanding this role of peroxiredoxin 6 has led to studies with a specific inhibitor of its phospholipase A2 activity that has the potential to ameliorate oxidative stress associated with lung inflammation.

Fisher Aron B: Peroxiredoxin 6: A bifunctional enzyme with glutathione peroxidase and phospholipase A2 activities. Antioxidants & redox signaling Epub ahead of print, Oct 2010.

back to top
Last updated: 08/23/2018
The Trustees of the University of Pennsylvania