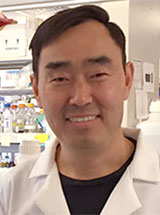 Description of Research
Our group focuses on the study of meiosis and spermatogonial stem cells. Meiosis, a cell division unique to germ cells, allows the reciprocal exchange of genetic material between paternal and maternal genomes. Meiosis generates the genetic diversity necessary for evolution of species. Abnormality in meiosis is a leading cause of birth defects and infertility. Spermatogonial stem cells are the adult male germline stem cells and responsible for life-long production of sperm. Our research interests include molecular genetics of chromosomal synapsis, DNA double-strand break repair, homologous recombination, self-renewal of spermatogonial stem cells, genetic causes of male infertility in humans, and piRNA biogenesis. Functional characterization of a number of new genes in our laboratory has uncovered novel regulatory mechanisms underlying key biological processes unique to germ cells. On one hand, our studies provide molecular insights into the development of germ cells in mice. On the other hand, these mouse studies have important implications for understanding the genetic causes of male infertility in humans and developing novel male contraceptives.

Biogenesis and function of piRNAs

Piwi-interacting RNAs are a diverse class of small non-coding RNAs implicated in the silencing of transposable elements and the safeguarding of genome integrity. In mammals, male germ cells express two genetically and developmentally distinct populations of piRNAs at the pre-pachytene and pachytene stages of meiosis, respectively. Pre-pachytene piRNAs are mostly derived from retrotransposons and required for their silencing. In contrast, pachytene piRNAs originate from about one hundred genomic clusters and their biogenesis and function remain enigmatic. We previously reported that MOV10L1 is required for biogenesis of pre-pachytene piRNAs. Subsequently we have demonstrated that conditional inactivation of the putative RNA helicase MOV10L1 in mouse spermatocytes produces a specific loss of pachytene piRNAs, significant accumulation of pachytene piRNA precursor transcripts, and unusual polar conglomeration of Piwi proteins with mitochondria. Pachytene piRNA-deficient spermatocytes progress through meiosis without derepression of LINE1 retrotransposons, but become arrested at the post-meiotic round spermatid stage with massive DNA damage. Our results demonstrate that MOV10L1 acts upstream of Piwi proteins in the primary processing of pachytene piRNAs and suggest that, distinct from pre-pachytene piRNAs, pachytene piRNAs fulfill a unique function in maintaining post-meiotic genome integrity. Our studies have demonstrated that MOV10L1 is a master regulator of the piRNA pathway in mammals.

Recently we have shown that MOV10L1 exhibits 5′-to-3′ directional RNA-unwinding activity in vitro and that a point mutation that abolishes this activity causes a failure in primary piRNA biogenesis in vivo. We demonstrate that MOV10L1 selectively binds piRNA precursor transcripts and is essential for the generation of intermediate piRNA processing fragments that are subsequently loaded to Piwi proteins. Multiple analyses suggest an intimate coupling of piRNA precursor processing with elements of local secondary structures such as G quadruplexes. Our results support a model in which MOV10L1 RNA helicase activity promotes unwinding and funneling of the single-stranded piRNA precursor transcripts to the endonuclease that catalyzes the first cleavage step of piRNA processing.

The X chromosome and Male Infertility

We have identified TEX11 as the first X chromosome-encoded meiosis-specific factor in mammals. In principle, meiosis-specific genes could be located anywhere in the genome. However, no mouse sex chromosome-linked mutants with meiosis-specific defects had been reported, leading to the perception that meiosis-specific factors are rarely if ever encoded by the sex chromosomes. We were the first to clone Tex11, an X-linked germ cell-specific gene. In a recent study, by ablating the function of Tex11 in mice, we have demonstrated that Tex11 is essential for meiosis and fertility in males. Our findings have important implications for male infertility in humans, which accounts for about half of the cases of infertility among couples. An estimated 15% of couples are affected by infertility worldwide. Genetic screening of a large cohort of idiopathic infertile men reveals that TEX11 mutations, including frameshift and splicing acceptor site mutations, cause infertility in 1% of azoospermic men. Furthermore, we find that TEX11 protein levels modulate genome-wide recombination rates in both sexes. These studies indicate that TEX11 alleles affecting expression level or substituting single amino acids may contribute to variations in recombination rates between sexes and among individuals in humans.

During meiosis, homologous chromosomes undergo synapsis and recombination. The arrangement of homologous chromosomes is tightly regulated by the synaptonemal complex (SC). SYCP2 is an integral component of SCs in mammals. Our genetic and cell biological studies demonstrate that SYCP2 is required for the formation of SCs and chromosomal synapsis (Yang et al., J Cell Biol 2006). We also find that TEX11 interacts with SYCP2 and is a novel constituent of meiotic nodules involved in recombination. TEX11 promotes both synapsis and recombination, and thus may provide a physical link between these two fundamental meiotic processes.

We performed a genome-wide proteomics screen and identified 51 knonwn and putative meiotic chromatin-associated proteins (Luo et al., Nature Commun 2013). We have functionally characterized two of these proteins - MEIOB and SCML2. MEIOB forms a complex with RPA and SPATA22 and is essential for meiotic recombination. Polycomb protein SCML2 associates with USP7 and counteracts histone H2A ubiquitination in the XY chromatin during male meiosis (Luo et al., PLoS Genetics 2015). We plan to elucidate the role of the novel meiosis-specific factors in the regulation of meiotic chromatin dynamics.

back to top
Last updated: 07/01/2022
The Trustees of the University of Pennsylvania