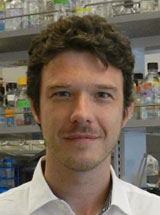 EPIGENETIC CONTROL OF TRANSCRIPTION DURING CELL DIFFERENTIATION AND ONCOGENESIS

In higher eukaryotes, the process of cell fate determination is at the very core of biological complexity. Genetically identical precursor cells (i.e. stem cells) can execute different transcriptional programs resulting in a wide range of differentiated cell types that are morphologically and functionally distinct. The Gardini lab works to characterize the transcriptional mechanisms that control fate choice and differentiation of human hematopoietic stem cells. In particular, we investigate how genomic regulatory sequences, termed enhancers, work to determine cell identity and specify blood lineages, such as monocytes/macrophages and granulocytes, from hematopoietic stem cells.
Furthermore, we strive to understand how large nuclear multi-protein complexes, such as Integrator and SWI/SNF, fine-tune transcription by coordinating activation of enhancers and their target promoters.

RESEARCH PROJECTS
ENHANCER REGULATION IN HEMATOPOIESIS AND LEUKEMIA
Enhancers are distal regulatory elements scattered throughout the entire genome. They play a fundamental role in orchestrating gene regulation during critical developmental processes such as cell differentiation. Furthermore, enhancers are active spots for transcription of long noncoding RNAs termed eRNAs (Gardini and Shiekhattar, 2015). These short-lived, non-polyadenylated transcripts are required to establish a link between the promoter and the distant regulatory enhancer (chromosomal looping) and contribute to the expression of the target protein-coding gene. The underlying mechanisms are poorly understood and the potential contribution of enhancers and eRNAs to cancer just started to emerge.
The lab is keen to understand how a network of enhancers drive the physiological process of hematopoiesis, and how this network is disrupted during leukemogenesis. We recently uncovered a novel enhancer regulatory axis in monocytic and macrophagic differentiation (Barbieri et al., 2018).

ROLE OF ARID1A IN TRANSCRIPTIONAL REGULATION
Chromatin remodelers regulate DNA accessibility by positioning nucleosomes at active promoters and enhancers. We investigate the function of SWI/SNF, the most mutated chromatin remodeler across all human cancers. Subunits of SWI/SNF, such as ARID1A, are found mutated in sporadic ovarian tumors and their specific contribution to SWI/SNF activity is poorly understood. We recently elucidated a novel function of ARID1A in pausing of RNA Polymerase II (Trizzino et al., 2018).

back to top
Last updated: 06/15/2018
The Trustees of the University of Pennsylvania