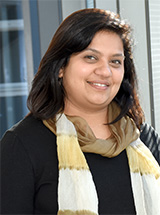 We are interested in understanding the molecular mechanisms of RNA mediated epigenetic gene regulation. Aberrations in epigenetic gene silencing can be a causal mechanism of numerous human disease and developmental syndromes. The eukaryotic genome is organized into chromatin, a mixture of histone proteins, DNA and RNAs (Figure 1). In recent years, RNAs have emerged as important factors that play critical roles in epigenetic gene regulation and also dictate chromatin architecture. It has also become clear that many protein factors that regulate gene expression interact with RNAs. Our goal is to elucidate the molecular mechanisms and functional implications of RNA interactions in gene regulation and in genome organization.

Our research has focused on an RNA binding chromatin remodeler, ATRX. ATRX is an epigenetic regulator that is mutated in both neurodevelopmental disorders and cancers. Despite its importance in normal development and maintenance of genome instability, how it contributes to these processes is not well understood. ATRX belongs to a unique class of proteins with the capacity to bind the 3 major chromatin components – DNA, histones, and RNA. While its action on DNA and histones have been studied to some extent, the functional significance of its interactions with RNA remains largely unexplored. Our previous studies have shown that ATRX interacts with the Xist long non-coding RNA and plays an important role in the process of X chromosome inactivation. ATRX also regulates the association of the Polycomb repressive complex 2 to the inactive X chromosome as well as many polycomb gene targets genome-wide (Figure 2).

We have recently discovered an RNA binding region (RBR) within ATRX. We hypothesize that ATRX is initially recruited to heterochromatic regions through its interactions with RNAs that reside at these loci. ATRX is stabilized at these regions through both histone and DNA contacts and functions in transcription repression at these sites to maintain genome stability (Figure 3). Some questions that we are addressing include: What RNAs interact with ATRX? Do RNA interactions dictate ATRX genomic targeting in vivo? How does loss of RNA interactions affect ATRX function in gene regulation and genome stability?

Another area of investigation in the lab is the impact of RNA associations on chromatin structure. Here we focus on triplex nucleic acid structures known as R-loops, that are comprised of an DNA:RNA hybrid and displaced ssDNA. R-loops are formed during transcription when the mRNA invades dsDNA (forming the DNA:RNA hybrid) and exposes a ssDNA that can then adopt a G quadruplex (G4) structure (Figure 4). Transcription from G rich repetitive regions results in the formation of G4 DNA that impedes the reannealing of DNA strands, promotes DNA:RNA hybridization, and stabilizes R-loops. In addition to known regulatory roles, R-loops are closely linked to increased DNA damage and genome instability. Stable aberrant R-loops have also been discovered in several neurological disorders, neurodegenerative diseases, and cancers. Discovering the genome-wide locations of R-loops is challenging because of the requirement for large sample size and inefficient enrichment using the monoclonal antibody that recognizes the RNA:DNA hybrid within R-loops. We have developed a new antibody independent approach, called MapR, to identify native R-loops genome-wide. Some questions that are interested in exploring are: Where do R-loops form in specific disease states? How do unscheduled R-loops contribute to neurodegenerative diseases and cancers? What are the protein factors that function in R-loop resolution and stabilization? How can R-loops impact gene regulation and genome organization in disease states?

For our studies we use a combination of biochemical, cell biological and functional genomics approaches in embryonic stem cell, neural stem cell, and cancer cell models.


Rotations:
Students who have been admitted to a graduate program at the University of Pennsylvania are encouraged to inquire about current rotation projects by sending an email to: ksarma@wistar.org.

back to top
Last updated: 07/09/2021
The Trustees of the University of Pennsylvania