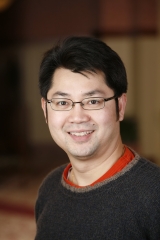 Description of Research
We are interested in understanding how cell polarity and cell division are orchestrated by the cytoskeleton. Our previous studies in fission yeast have shown that bundles of microtubules can direct new sites of actin-dependent polarized cell growth; and microtubules organize the mitotic spindle for chromosome segregation. Cytoskeletal architecture and dynamics are influenced by associated proteins such as motors and bundlers, and regulatory proteins such as kinases and phosphatases. A long-term goal is to understand the molecular mechanisms by which these proteins function, and establish potential evolutionary conservation between yeast and man. Our plan is to (1) identify the molecular components of the cell shape and cell division pathway, (2) define the interactions of known (and newly discovered) cytoskeletal proteins and their roles in cell polarity and cell division, and (3) develop and apply advanced optical imaging analysis, and microfluidics methods to the yeast and mammalian cell systems (Fig. 1).

Figure Legend:
Figure 1. Microtubule-dependent processes in fission yeast.
(A) Schematic of the different phases of mitosis in fission yeast. Time-lapse images show wildtype and Csi1Δ mitotic spindles (mCherry-Atb2) and kinetochores (Mis12-GFP). In wildtype, the kinetochores are at the spindle midzone during metaphase and promptly move to the spindle poles at the onset of anaphase B. In contrast, kinetochores are seen ‘lagging’ during anaphase B in Csi1Δ cells (Csi2Δ cells have similar phenotype). Each frame is 3min interval. (Adapted from Costa et al, 2014). (B) Wildtype and Mmb1Δ cells expressing the mitochondria marker Cox4-GFP. Wildtype mitochondria are tubular and stretch along the length of the cells. In contrast, Mmb1Δ cells show aggregated mitochondria displaced to one or both cell ends. (Adapted from Fu et al, 2011). (C) Wildtype cells expressing GFP-Atb2 (tubulin) and Cox4-mCherry (mitochondria). The model shows that microtubules and mitochondria are co-localized due to Mmb1p (yellow circles). (Adapted from Fu et al, 2011). (D) Design of the fast microfluidic temperature-control chip for live-cell imaging. The chip can change temperature between 5-45°C in 10sec. The chip is suitable for studies using thermo-sensitive mutations. (Adapted from Velve-Casquillas et al, 2011). (E) Fission yeast zygote of mated cells expressing GFP-Atb2 (tubulin) and Cut11-GFP (nuclear membrane). In wildtype cells, nuclear congression occurs in 25min. The model shows that kinesin-14 Klp2 and dynein Dhc1 play parallel roles in pulling the nuclei together. (Adapted from Scheffler et al, 2015). (F) Wildtype cell expressing Knk1-GFP. Knk1 is a novel AAA+ATPase that oscillates between the two growing cell tips. The absence of Knk1 results in a novel ‘kinked’ cells phenotype. (Adapted from Scheffler et al, 2014)
Bar, 5µm.

back to top
Last updated: 12/04/2017
The Trustees of the University of Pennsylvania