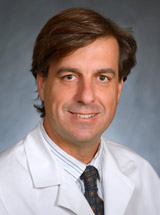 Dr. Pedro Gonzalez-Alegre is a physician-scientist certified by the American Board of Psychiatry and Neurology and with subspecialty training in Movement Disorders/Neurogenetics. After completing his residency and fellowship training at the University of Iowa, he joined the faculty at that institution where he reached the rank of Associate Professor with tenure. In 2014, he was recruited to the Department of Neurology at the University of Pennsylvania. He has been elected to the Best Doctors in America list every year since 2009. He is the founding director of the Penn HD Center since 2015, gaining designation as a Center of Excellence of the HDSA (Huntington’s Disease Society of America) in 2016. He also launched a new Neurogenetics Clinic at Penn in 2015.

Dr. Gonzalez-Alegre has devoted significant efforts to education. He has been the advisor of several graduate students that successfully obtained their PhD, mentored numerous undergraduate and medical students, neurology residents and fellows, and participated in multiple local, national and international educational programs related to neurology. He was named Associate Director of the Neurology Residency Program at the University of Iowa in 2009, Residency Program Director and acting Vice-Chair for Education in 2012, Chair of the Seminar Committee and Member of the Executive Committee of the Interdisciplinary Program in Neuroscience at the University of Iowa in 2012. His educational efforts were rewarded by the 2009 and 2012 Medical Education Faculty Award in Neurology of the Carver College of Medicine at the University of Iowa and the 2014 Best Teacher Award from the Neurology Residents at UI.

Dr. Gonzalez-Alegre is a highly committed clinician-scientist who directs a laboratory devoted to the investigation of the neurobiological bases and therapeutics of dystonia. For his research efforts, funded through federal and private sources, he has been recognized with 2003 S Weir Mitchell Award of the American Academy of Neurology, the 2004 Junior Award for Excellence in Basic Science Research from the Movement Disorders Society, the 2012 Jon Stolk Award in Movement Disorders from the American Academy of Neurology, and the 2012 Stanley Fahn Award from the Dystonia Medical Research Foundation. He is also Co-Director for Clinical Programs of the Raymond G. Perelman Center for Cellular & Molecular Therapy at the Children Hospital of Philadelphia, involved in translational efforts to advance novel molecular therapies for various neurological diseases to early phase clinical trials.

back to top
Last updated: 01/31/2020
The Trustees of the University of Pennsylvania