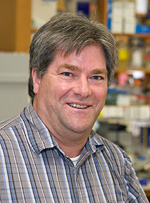 Description of Research Expertise
Summary of Research Interests
In our lab we study two cognitive disorders; Fragile X Mental Retardation and Alzheimer's disease. To study these disorders we utilize Drosophila models. These models are mutants of the Drosophila homologues of the humans genes associated with these disorders. With these models we are investigating the biochemical functions and biochemical pathways affected by the loss of the disease related proteins that cause phenotypes that are similar to symptoms display by patients of these diseases (see below). Our goals are to gain insight into the underlying causes of the respective disease symptoms as an approach to develop therapeutic strategies to treat these disease as well as to learn more about the basic mechanisms required for normal learning and memory.

Recent discoveries:
Fragile X Syndrome
1) The deficits in circadian behavior are due to defects in the circadian output pathway. (See Dockendorff et al., 2002).

2) The social interaction, and memory deficits appear to be due to enhanced signaling through the metabotropic glutamate receptor (mGluR) as these phenotypes can be rescued by pharmacological treatment that downregulates mGluR activity (See McBride et al., 2005).

3) dFMR1 protein expression levels are regulated by the gene Ago2, a gene previously implicated is the siRNA pathway. ( Pepper et al., 2009)

Alzheimer's Disease
1) We have developed a new model to study aspects of Alzheimer's disease. This model displays adults age onset cognitive deficits and autosomal dominant inheritance, much like that observed for Familial Alzheimer's Disease (FAD). (McBride et al., under revision)

2) We have identified a pharmacological approach to ameliorate the age onset cognitive deficits. (McBride et al., under revision)

Fragile X Syndrome:
Fragile X Syndrome is the most commonly inherited form of mental retardation in humans. Patients with this disorder also display symptoms that include sleep problems, attention deficit, hyperactivity and often display symptoms that fall within the Autism Spectrum. In fact 20-50% of fragile X patients are clinically diagnosed with autism. Fragile X is caused by the loss of FMR1 gene function that in most cases is due to an expansion of a trinucleotide repeat in the 5' leader sequence of the gene. The increased number of repeats triggers hypermethylation of the FMR1 locus preventing its transcription. This unfortunate association of the CGG repeat with the FMR1 gene is the reason is it the most common genetically inherited form of mental retardation.

Initial characterization of the FMR1 protein has shown that it is an RNA binding protein, with specificity for a subpopulation of mRNAs within neurons. It has a demonstrated role in regulating the translation of specific RNAs.

The Drosophila genome contains a single gene that is highly homologous to the FMR1 gene, called dfmr1. We have developed a Drosophila Model to Study Fragile X Syndrome, based on null mutants that lack dfmr1 function. Interestingly, this model displays several phenotypes that bear similarity to the symptoms of Fragile X patients. These include circadian defects, short-term memory defects, attention deficit and episodic hyperactivity. In addition, this fly model also displays neuroanatomical defects that are similar to neuronal defects found in subsets of neurons in the brains of Fragile X patients. The dfmr1 mutants have neuroanatomical defects in the major learning and memory center of the brain. This deficit can be rescued by treatment with metabotropic glutamate receptor antagonists.

Studies of dFMR1 protein function:
dFMR1 protein expression levels are regulated by the gene Ago2, a gene previously implicated is the siRNA pathway.

Loss of Ago2 activity leads to enhanced expression of dFMR1 protein in
brains and egg chambers.

dFMR1 levels are significantly elevated in Ago2 mutant brains

as well as egg chambers Over-expression of dFMR1 due to loss of Ago2 leads to defects in the neuromuscular junction.

Alzheimer's disease is a neurodegenerative disease characterized by progressive impairments in memory and cognitive abilities with a typical onset in late age. In cases of early onset familial Alzheimer's disease (FAD) however, the onset can be as early as the third and fourth decades of life. The histopathological hallmarks of Alzheimer's disease are amyloid plaques and neurofibrillary tangles in the brains of afflicted patients. The majority of FAD cases have been linked to mutations in the Presenilin 1 and Presenilin 2 genes. Interestingly, FAD cases exhibit an autosomal dominant genetic pattern in which the disease is caused by a mutation in a single copy of one of these three genes.

Several genetic studies in mice, Drosophila and C. elegans indicate that a reduction in the functional activity of Presenilin genes contributes to the pathogenesis of FAD. Based on these observations, we have developed a Drosophila model for FAD based on reducing function of the sole psn homologue in the Drosophila genome. We have found that this Drosophila psn haploinsufficiency model recapitulates key aspects of Alzheimer's disease, including cognitive dysfunction at the adult stage with age-dependent progression, and an autosomal dominant genetic basis. A Link Between the Fragile X and FAD models:

In studies aimed at identifying potential pathways affected by decreased psn function, we identified a strong genetic interaction between psn and the Drosophila fragile X mental retardation gene. This interaction prompted us to investigate the efficacy of treating our FAD model with drugs that reduce mGluR activity. We have found that these treatments prevent the age-dependent cognitive decline observed in these flies. In addition, we observed that late stage pharmacological treatments of aged flies were able to rescue the cognitive defects after they had become manifested. We have genetically verified these results and have results that suggest that a pathway mediating calcium release is particularly important for the age-onset phenotypes. Rotation Projects
There are rotation projects for all of our disease models that include molecular, biochemical and/or behavioral studies.
There are openings in my lab for new students or postdocs.


back to top
The Trustees of the University of Pennsylvania
am, Aatika- Volunteer

back to top
Last updated: 02/07/2014
The Trustees of the University of Pennsylvania