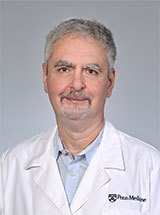 My laboratory has a long-standing interest in pathobiology of solid and hematopoietic malignancies, in particular lymphomas and leukemias and other pediatric and adult cancers driven by MYC overexpression. The current research focuses on the role of non-coding RNAs (including microRNAs) and mRNA processing (splicing, polyadenylation, etc) in cancer pathogenesis and therapeutic resistance.

Since its inception in 1997, the Thomas-Tikhonenko laboratory was broadly interested in the mechanisms of neoplastic transformation by the Myc family oncoproteins (including c- and N-Myc). The corresponding genes are altered via chromosomal translocation in B-cell lymphomas and are amplified or otherwise deregulated in many solid malignancies in adults and children alike. Yet their exact roles in promoting neoplastic growth in genetically complex human cancers remained only partially understood.

Since 2018, the Thomas-Tikhonenko lab has been an integral part of the Pediatric Immunotherapy Discovery and Development Network (PI-DDN) funded through Beau Biden Cancer Moonshot Initiative. Our most recent work informed the central hypothesis that non-canonical exon usage plays a dual role in leukemia and other pediatric cancers. On the one hand, it provides cancers with intrinsic mechanisms of epitope loss, which can render targeted immunotherapy ineffective. On the other hand, alternative splicing could be a source of cancer-specific epitopes and as such could aid immunotherapy. By simultaneously exploring the effects of alternative splicing on antigen loss and neo-epitope gain, we aspire to lay ground for the development of new immunotherapeutics that would target pediatric cancers with the specificity current modalities do not possess.

In 2008, I moved my lab across campus to The Children's Hospital of Philadelphia, where it became an integral part of the Center for Childhood Cancer Research. This integration allowed me to foster new collaborations with key physician-scientists and pursue multiple translational projects focused on (but not limited to) pediatric malignancies.

back to top
Last updated: 02/02/2023
The Trustees of the University of Pennsylvania