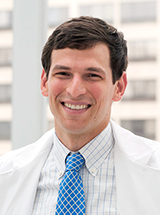 David Fajgenbaum, MD, MBA, MSc, FCPP, is an Assistant Professor of Medicine in Translational Medicine & Human Genetics at the University of Pennsylvania, Founding Director of the Center for Cytokine Storm Treatment & Laboratory (CSTL), Associate Director, Patient Impact of the Penn Orphan Disease Center, and Co-Founder/President of the Castleman Disease Collaborative Network (CDCN). He is also the national bestselling author of 'Chasing My Cure: A Doctor's Race to Turn Hope Into Action' (http://www.ChasingMyCure.com) and a patient battling idiopathic multicentric Castleman disease (iMCD). He is in his longest remission ever thanks to a precision treatment that he identified, which had never been used before for iMCD. He has also identified and/or advanced 9 other treatment approaches for iMCD and cancer.

One of the youngest individuals ever appointed to the faculty at Penn Medicine and in the top 1 percent youngest awardees of an NIH R01 grant, Fajgenbaum has published scientific papers in high-impact journals such as the New England Journal of Medicine, Journal of Clinical Investigation, and Lancet, been recognized with awards such as the 2016 Atlas Award along with then Vice President Joe Biden, and profiled in a cover story by The New York Times as well as by Good Morning America, CNN, Forbes 30 Under 30, and the Today Show. An authority on cytokine storms and their treatment, Fajgenbaum currently leads over 20 translational research studies including the CORONA Project, which is the world’s largest effort to identify, track, and advance COVID-19 treatments. He also serves on the Board of Directors for the Reagan-Udall Foundation for the FDA, co-Chair of the Advisory Board for the CURE Drug Repurposing Collaboratory, and co-Chair of the Scientific Advisory Board for the CDCN.

Dr. Fajgenbaum earned a BS in Human Sciences with Distinction from Georgetown University, where he was USA Today Academic All-USA First Team and a Quarterback on the Division I football team, a MSc in Public Health from the University of Oxford as the 2007 Joseph L. Allbritton Scholar, a MD from the Perelman School of Medicine at the University of Pennsylvania, where he was a 21st Century Gamble Scholar, and a MBA from The Wharton School, where he was awarded the Joseph Wharton Award, Core Value Leadership Award, Kissick Scholarship, Wharton Business Plan Competition Social Impact Prize, Eilers Health Care Management Award, Mandel Fellowship, and Commencement Speaker.

back to top
Last updated: 01/23/2023
The Trustees of the University of Pennsylvania