The Kelly lab is interested in the mechanisms and consequences of mitochondrial biogenesis and remodeling in the developing and diseased heart. An overview of our ongoing research projects is provided below.

We are interested in the fuel and energy metabolic disturbances that contribute to the worldwide health problem of heart failure. Early studies by our group delineated the molecular genetic basis of inherited defects in mitochondrial fatty acid oxidation (FAO) that cause childhood sudden death and heart failure. These studies prompted us to determine whether similar metabolic alterations occur in common forms of heart failure due to disease drivers such as hypertension, coronary artery disease, and diabetes. We, and others, found that common acquired forms of heart failure are associated with re-programming of cardiac fuel metabolism and mitochondrial function. Importantly, significant genetic and experimental evidence indicates that fuel and energy metabolic disturbances contribute to the pathogenesis of heart failure. We have defined transcriptional regulatory events that underlie mitochondrial biogenesis and maturation during normal cardiac development, and how mitochondrial function becomes altered in the hypertrophied and failing heart. We discovered that members of the nuclear receptor superfamily, including peroxisome proliferator-activated receptors (PPARs) and estrogen-related receptors (ERRs), are necessary and sufficient for mitochondrial biogenesis and maturation along with the development of specialized fuel utilization programs in the developing heart. This circuitry is controlled, in part, by the PPARg coactivator-1 (PGC-1) coregulators (PGC-1a and PGC-1b). Current projects in the lab focus on PGC-1/ERR signaling. Using human induced pluripotent cardiac myocytes (hiPSC-CM), gene edited mouse models, and assessment of cardiac tissue from well-characterized humans with heart failure, we have shown a master regulatory role for the ERRs. This has led to studies aimed at assessing the potential for activation of ERR signaling as a treatment for heart failure. We also seek to investigate mechanisms involved in mitochondrial signaling to the nucleus via metabolite-mediated epigenomic events. The long-term goal of these studies is to determine whether these factors or selected downstream responses will serve as suitable targets for novel metabolic modulator therapy aimed at heart failure.

This project involves employing unbiased molecular profiling (-omic) approaches to probe mitochondrial phenotypic programming during the development of heart failure in well-defined mouse models and in humans. To this end, we have conducted integrated whole genome RNA sequencing, quantitative targeted metabolomics, and mitochondrial proteomics. Our profiling has led to a series of discoveries that have spawned new projects including: 1) mitochondrial protein lysine acylation is increased in the failing heart, likely due to altered short-chain carbon balance in the mitochondrial matrix. We seek to determine the functional significance of this interesting post-translational modification; 2) surprisingly, the failing heart shifts to burning ketone bodies as a fuel. Studies are ongoing to determine if this fuel switch is adaptive. If so, we seek to develop strategies to increase ketone utilization as a new heart failure treatment; and 3) mitochondrial proteins undergo dynamic changes in phosphorylation status. We seek to determine how both acylation and phosphorylation status impacts mitochondrial function, and if such post-translational modifications are relevant to the pathogenesis of heart failure.

The broad goal of this project is to identify metabolic “checkpoints” relevant to muscle function and insulin sensitivity. It is well known that accumulation of intramyocellular lipid (IMCL) is tightly associated with the development of insulin resistance in obese individuals. However, the mechanisms involved in this linkage are poorly understood. Delineation of pathways that coordinately control muscle lipid depots and insulin signaling would be very useful for the field of diabetes, given that there are few therapeutic approaches that target muscle insulin resistance and myocellular lipotoxicity in pre-diabetic and diabetic states. This project began with an unbiased, small molecule screen of myocytes in culture that had been loaded with lipid. We sought to identify molecular probes that reduced lipid levels while increasing glucose uptake. Once such probe was identified, and through a series of transcriptional profiling and cellular metabolic studies in human skeletal myotubes, we found that the small molecule inhibited the transcription factor, MondoA. MondoA is a skeletal muscle-enriched factor that is highly related to MondoB, also known as carbohydrate response element binding protein (ChREBP), a liver-enriched factor that controls hepatic glucose and lipid metabolism. The results of our recent studies strongly suggest that MondoA regulates enzymes and pathways that control the amount of fuel available for combustion in myocytes. Specifically, MondoA increases triglyceride synthesis in order to store excess fatty acid and inhibits insulin signaling to reduce the amount of glucose (fuel) entering the cell. In other words, we believe that MondoA serves as a “brake” or checkpoint on nutrient uptake during times of “plenty”. Further, we hypothesize that under conditions of chronic nutrient excess (obesity), MondoA is chronically activated, driving excessive myocyte lipid accumulation and chronic insulin resistance. We will also assess the role of MondoA in liver and heart. We are testing these hypotheses using skeletal muscle-specific and generalized MondoA knockout mice. In addition, we are undertaking RNA sequencing and whole genome chromatin immunoprecipitation-sequencing (ChIP-seq) with MondoA antibodies to define downstream targets in human skeletal myotubes. We are also conducting studies to determine whether MondoA is necessary for storing fuel in muscle in preparation for repeated bouts of exercise and in disease states such as disuse atrophy and sarcopenia. If MondoA proves to be a key regulator of muscle fuel metabolism and insulin signaling in vivo, it could serve as an excellent new therapeutic target aimed at insulin resistance in the setting of obesity.

A second project has evolved based on an interesting phenotype of muscle specific PPAR (MCK-PPARa and MCK-PPARd) transgenic mice generated in our laboratory. MCK-PPARa mice have very high rates of fatty acid oxidation (FAO) in muscle and are completely resistant to diet-induced obesity (DIO). We have shown that the resistance to DIO is due at least in part to increased energy expenditure due to the incredibly high rates of FAO. The fatty acids that supply the muscle FAO pathway in the transgenic mice come from lipolysis of adipose tissue. These results strongly suggest a communication mediated by signals between muscle and fat tissue. We hypothesize that factors secreted by skeletal muscle downstream of PPAR signaling serve this signaling function. We have identified a candidate list of such factors using RNA sequence analysis, and are testing them using loss- and gain-of-function in mice and in cells in culture. Delineation of such “crosstalk” factors could lead to new therapeutic approaches for obesity and muscle fitness.

Project 4: The Role of Mitochondrial Metabolism in the Development of Resistant Melanoma

Significant evidence implicates adaptive changes in mitochondrial metabolism as an important determinant of the behavior of certain cancers. Recently, the development of therapeutic resistance in melanoma has been linked to changes in mitochondrial function downstream of the transcriptional coactivator PGC-1a. Given our longstanding interest in the PGC-1/ERR regulatory axis in heart, we are well-positioned to apply our knowledge and reagents to study melanoma metabolism. To this end, we have recently joined a group of cancer biologists led by Dr. Ze’ev Ronai (Sanford Burnham Prebys Medical Discovery Institute) to probe the potential roles of PGC-1 and ERR in the development of melanoma drug resistance. We are preparing CRISPR-based functional genomic screens to identify genes involved in the mitochondrial-mediated therapeutic resistance in human melanoma cell lines. 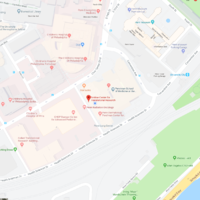