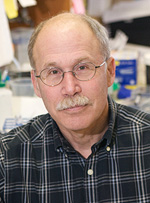 In eukaryotic organisms gene regulation is dependent upon developmentally controlled alterations in chromatin structure. Epigenetic modifications in histones and DNA result in selective activation of gene expression profiles. In many cases these modifications in chromatin structure result in long-range control of gene promoters, reaching over hundreds of kbs. Understanding how these epigenetic modifications are themselves controlled and the mechanisms by which they selectively activate and/or silence cohorts of genes is central to our understanding of development and cellular differentiation. We are approaching these questions using as a model the human Growth Hormone gene cluster. The genes in this cluster are robustly expressed, physiologically and developmentally controlled, and highly specific to either pituitary somatotropes or placental syncytiotrophoblasts. These controls are conserved between mouse and human. Thus our studies are heavily dependent on the use of transgenic mouse models and are complemented where appropriate with in vitro chromatin analyses and cell culture models.

At any given level of gene transcription, the final level of expression for a particular gene can be altered over a span of several orders of magnitude by modulation in mRNA stability or translational control. For example the half-lives of specific mammalian mRNAs can be as short as 15 minutes and as long as several days. Such post-transcriptional controls are dependent on sequence specific interactions between RNA binding proteins and target mRNAs. We are using a series of model mRNAs and expression systems to explore the role of a specific and highly abundant family of mRNA binding proteins, the αCPs, in mRNA stabilization and a variety of additional post-translational controls. These studies are based on in vitro RNA-protein interaction assays and cell-based expression models. Comprehensive studies of αCP functions are being carried out using immunoaffinity RNP-isolation, Affymetrix chip expression platforms, artificial tethering of RNA binding proteins to mRNAs, and biochemical analysis of RNP sub-localization. We are testing novel models by which mRNAs are stabilized by alterations in the stability of their 3' polyA tails. These analyses of mRNA decay are also revealing novel pathways of mRNA surveillance pathways and mRNA structural modification that impact on the expression of both wild-type and mutant gene expression.

Activation of placental hormone gene expression.
The hGH multigene locus contains a subset of GH-related genes expressed robustly and exclusively in the placenta. We are able to model this expression in transgenic mice carrying the intact hGH gene cluster with remote regulatory elements. Our current studies are aimed at identifying the cis-acting chromatin-based determinants of this highly restricted and developmentally controlled pattern of expression. These studies are carried out in transgenic mice and in ES and trophoblast stem (TS) cells derived from our various mouse lines carrying the hGH locus and addtional site-directed mutations. These studies, in conjunction with our studies of the hGH locus in the pituitary comprise an integrated approach to a chromatin locus with multiple developmental expression profiles and potentials.

Rotation Projects
Lab rotations are available in the areas of chromatin structure/gene activation and in the area of mRNA-protein interactions/mRNA stability control. Studies making extensive use of mouse transgenic models, stem cell cultures, and a variety of in vitro approaches can be explored. Students are encouraged to contact Dr. Liebhaber directly to discuss potential projects for rotation studies.

Lab personnel:
Please see our lab web-site for this information. Our laboratory has a steady state of approximately 10 doctoral and postdoctoral scientists.

back to top
Last updated: 07/25/2012
The Trustees of the University of Pennsylvania