The Nathanson group works collaboratively with the Neuroendocrine Tumor Center at Penn Medicine on the genetics of pheochromocytoma and paraganglioma (PCC/PGL).  They published their clinical genetic testing experience in PCC/PGL (Ann Surg Oncol, 2013), showing an inherited mutation rate of over 40%, accompanied by an editorial encouraging other clinicians to follow their paradigm for clinical genetic testing her group has established at Penn. Her group also was the first to identify somatic mutations in ATRX, associated with clinically aggressive disease (Nat Comm, 2015).  Further, she co-led the Cancer Genome Atlas effort in PCC/PGL, which had multiple novel findings, including a recurrent fusion protein specific to this disease, and genetic/genomic predictors of poor prognosis (Cancer Cell, 2017). The group is continuing to collect samples from patients with PCC/PGL and SDHx mutations for further study. 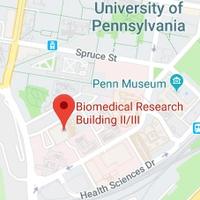