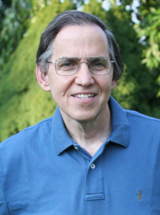 Research Interests
Our laboratory is interested in the mechanisms by which oncogenic proteins of human viruses exploit cellular functions and regulate gene expression to produce disease and cancer.

Description of Research
1. The mechanism of E1A-12 mediated tumorigenesis

In Ad12 tumorigenic cells, surface levels of the major histocompatibility class I antigens become greatly diminished, enabling these cancerous cells to escape immunosurveillance by cytotoxic T lymphocytes. We've shown that the E1A-12 protein mediates this effect by altering the binding of two transcription factors (NF-kB and COUP-TF) to the class I enhancer which, in turn, blocks transcription from the class I promoter. Specifically, the activator NF-kB becomes hypophosphorylated on a specific residue (serine 337) that disables it from binding to its cognate recognition site on the class I enhancer. This finding alone provided a new dimension into how NF-kB, the major regulator of genes involved in immune defense, can modulate gene expression. In addition, the repressor COUP-TF becomes strongly bound to a different recognition site on the class I enhancer, where it associates with a histone deacetylase (HDAC) and E1A-12, resulting in chromatin compaction. In this way, E1A-12 mediates global transcriptional shut-off of the class I promoter. In addition to class I shut-off, we have shown that E1A-12 contains a novel 20 amino acid region domain (called the Spacer) which appears to encode a new function also necessary for tumorigenesis. Fascinatingly, we have recently shown through genomic microarray analyses that non-neuronal cells transformed Ad12 appear to become reprogram into expressing many neuronal-like genes that may contribute to the tumorigenic phenotype.

2. Structure and function of the E1A-5 transactivating protein

Critical to understanding gene expression is the manner by which transcriptional promoters are stimulated by transactivating proteins. The E1A-5 protein of adenovirus contains a 46 amino acid transactivating domain that stimulates promoters by serving as a bridge between the basal transcription complex and upstream factor binding sites. A zinc finger within the transactivating domain binds to the TATA box binding protein (TBP) and a newly discovered cellular factor, hSur-2 (a subunit of human mediator complex), while residues flanking the zinc finger associate with other basal transcription factors, referred to as TAFs. The way which E1A-5 and the cellular proteins interact is being investigated using genetic, biochemical and structural approaches.

3. The Processivity Factor of KSHV: mechanism and antiviral targeting

KSHV (HHV-8) is a relatively new human herpesviruses that is the etiological agent of Kaposi's sarcoma (KS) and certain B-cell lymphomas. We have discovered PF-8, the processivity factor KSHV that enables the viral DNA polymerase (Pol-8) to remain on the template and incorporate thousands of nucleotides. Specifically, we have shown that Pol-8 alone incorporates only three dNTPs whereas a 7,249 deoxynucleotide full-length test-template is synthesized when PF-8 is present. Moreover, this KSHV complex is specific in that other processivity factors and polymerases cannot substitute for PF-8 or Pol-8, making it an excellent drug target. We have recently shown that PF-8 forms homodimers both in solution and on the DNA where it confers stability to Pol-8 on the primer DNA template. We are examining the mechanism by which PF-8 tethers Pol-8 to the template and yet enables the complex to move along the DNA. In addition we have developed a patented mechanistic assay that is now being used for high-throughput robotic-testing of tens-of-thousands of compounds for their abilities to block DNA synthesis by Pol-8 and PF-8. Compounds that block DNA synthesis in vitro will be tested for their abilities to block KSHV infection. This approach is also being used to develop anti-viral compounds against small-pox.

back to top
Last updated: 08/25/2016
The Trustees of the University of Pennsylvania
Top ↑