Mechanisms of Oncogenesis by Gammaherpesvirus

Since 1997 the Robertson lab has been dedicated to the study of virus-host interactions with a preference for viruses associated with cancers. Primarily, we study the two human gammaherpesviruses Epstein-Barr Virus (EBV) and Kaposi's Sarcoma Herpesvirus (KSHV) and mechanisms of oncogenesis by these tumor viruses. In particular, we are using genetic, genomic, proteomic and biochemical approaches to identify viral pathways involved in these cellular events to develop mechanistic models for transformation by gammaherpesviruses. Recent studies in our laboratory have also been geared towards understanding the role of the microbiome and its contribution to cancer. We are also working on developing preclinical datasets for therapeutic compounds with specificity for viral-associated cancers with the potential for moving into a phase 1 trial.

EBV and KSHV are gammaherpesviruses which are associated with a number of human malignancies. KSHV is associated with Kaposi's sarcoma (KS), Multicentric Castleman's disease and body cavity based lymphomas also referred to as pleural effusion lymphomas. EBV causes infectious mononucleosis (IM), Hodgkin's Lymphoma, Burkitt's Lymphoma, nasopharyngeal and breast carcinomas. Typically, infection by either of these viruses is asymptomatic. In fact, EBV infection is very common as greater than 90% of adults are seropositive for EBV. KSHV infection is less common in the general population, although there is a higher percentage of infected individuals in specific geographic regions and in immunocompromised individuals. After infection, these viruses can cause an initial lytic infection where infected cells actively produce viral progeny. Afterwards, the virus enters a quiescent latent phase, stably establishing itself for the lifetime of the host.

Kaposi's sarcoma became popular to the public in the early 90s as one of the most apparent AIDS-defining illnesses. In 1994 Chang and Moore identified KSHV as the causative agent associated with Kaposi's sarcoma. KSHV was identified as the second human oncogenic herpesvirus with collinear homology to EBV and infects human B-cells and endothelial cells. However, the mechanism of KSHV mediated oncogenesis is not well characterized. The KSHV Latency-Associated Nuclear Antigen (LANA) is the most consistently detected antigen in KSHV-infected cells of disease origin and is the hallmark of KSHV genome persistence. LANA tethers the KSHV genome to histones and modulates cell cycle, transcription, apoptosis, and chromatin remodeling.

Dr. Erle Robertson received his B.S. in Microbiology from Howard University in 1987, and his Ph.D. in Microbiology and Molecular Genetics from Wayne University in 1992. He moved on to Harvard Medical School to complete his post-doctoral training. Dr. Robertson was an Associate Professor in the Department of Microbiology and Immunology at the University of Michigan Medical School before joining the University of Pennsylvania. He is currently a Professor of Microbiology, the Director of the Tumor Virology Training Program, and the Vice Chair of Research for the Department of Otorhinolaryngology. Dr. Robertson runs a Virology lab with post-doctoral fellows and has produced over 200 publications, including 8 books, and 9 patents.

The Henle Symposium on Viral Oncogenesis: coming in June 3rd, 2022

The TV Seminar will be held Friday February 18 at 12 PM via "bluejeans" due to rising COVID-19 case counts on campus, all indoor social gatherings are prohibited.

The TV Seminar will be held Friday March 21 at 12 PM via "bluejeans" due to rising COVID-19 case counts on campus, all indoor social gatherings are prohibited. 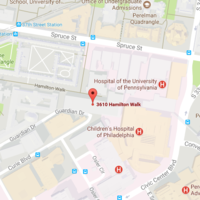