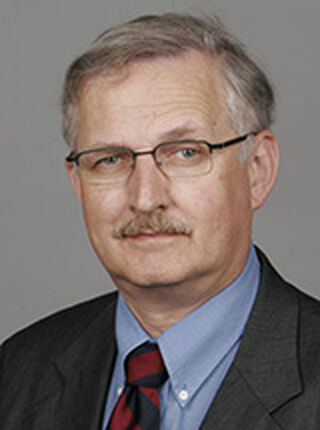 Research Interests
Herpes Simplex Virus: Latency and reactivation, from the nervous system, Gene therapy and cancer therapy in the CNS.

Description of Research
Using the techniques of molecular biology, we have studied HSV-1 latency in a mouse model system. My group has shown that the physical state of the latent viral DNA is episomal and not integrated, and that it is harbored in the trigeminal ganglia and brain stem of latently infected mice. Furthermore, the latent DNA appears to be coated with nucleosomes and thus is similar to cellular chromatin. We think that this is most significant as it suggests that gene expression from the latent viral DNA is under the control of cellular transcription factors. Present work is confirming the role of chromatin in the control of viral gene expression using CHIP analysis. This technique allows us to study the modification of chromatin histone proteins (acetylation/methylation) at different stages of viral gene expression.

In situ hybridization has allowed us to visualize latently infected cells in peripheral nervous system (trigeminal ganglia) and the central nervous system (brain) tissue of mice and humans. Using radioactive probes we have been unable to detect the latent genome, but have been successful in detecting gene expression from it. The RNA detected can be shown to map to about 10% of the viral genome - the repeat long region - and there is a very strong region of hybridization corresponding to the 1/3 of this region. The in situ data has shown that the latently infected cells are neuronal cells, that the viral RNA expressed is mainly in the nucleus of the latently infected cells - rather than in the cytoplasm as is seen for cellular mRNA's. A further interesting finding from the in situ hybridization data is the presence of infected neuronal cells in the CNS of latently infected mice. The anatomical regions of the brain harboring the latent infection are those expected from the site of inoculation (the eye) and the spread of virus via neuronal cells to the trigeminal ganglia and hence via the nerve root to the brain stem; where regions associated with the trigeminal system are found to be positive. Furthermore, although the CNS tissue cannot be shown to harbor a latent infection by virological methods, by every molecular biology test so far applied, the state of the viral DNA and its gene expression during latency in CNS tissue appear to be identical to that in PNS tissue. Thus we are left with the conclusion that there is a biological difference between the neuronal cells in CNS and PNS tissue which accounts for the difference in reactivatibility.

By northern blotting, three transcripts can be mapped to the 3% of the viral genome determined to be highly positive by in situ hybridization studies. These transcripts of 2 kb, 1.5 kb and 1.45 kb are transcribed from left to right on the conventional map of the HSV-1 genome. They overlap at their 3' end with the 3' end of ICP0, an immediate early gene which is transcribed in the opposite direction. These transcripts appear to be nuclear localized during viral latency and are non- polyadenylated. Infact we, and others, have shown that the 2kb LAT RNA is an intron with unusual stability (half life =26hrs). This is by far the most stable intron known. Work from our lab has suggested a hairpin structure at the 3' end of the 2kb LAT intron allows for the use of a non-consensus branch point sequence, leading to the unusual stability of the intron. The promoter of the LAT functions in neuronal cells during latency and thus chimeric genes containing the LAT promoter should express in these cells. We are presently developing vector systems for use in gene therapy in the nervous system. In collaboration with a group working on mucopolysaccharidosis type VII (a lysosomal storage disease which is caused by a defect in the enzyme b-glucuronidase), we have inserted the b-glucuronidase gene into HSV-1 and detected expression in latently infected mice. We will use our HSV vectors to study b-glucuronidase in neuronal cells of b-glucuronidase-negative mice, as a model for human lysosomal storage disease in the nervous system.

The function of the LAT gene has been studied by our lab and others. We have shown that there is an anit-apoptotic function that appears to be important in maintaining latency in the infected PNS neuron. Recently we have shown that this anti-apoptotic effect is mediated by an miRNA that is cleaved from the exon 1 region of the LAT. We have also shown that the stable intron plays a role in protecting the infected cell from stress. The mechanism whereby the LAT transcript helps the virus to maintain the latent infection are novel and critical to the ability of the virus to form latent infections that last for the life of the infected individual.

The role of the immune system in limiting the spread of HSV has also been studied. In SCID mice, in the absence of functional B and T lymphocytes, HSV expression in neurons is still limited indicating that some other components of the immune system are active in this respect.

Rotation Projects
Rotation project can be tailorod to each students needs within the framework of our on going research in basic HSV virology, gene therapy, or cancer therapy. Please call (215-898-3847) for a visit with our lab.

back to top
Last updated: 08/23/2016
The Trustees of the University of Pennsylvania
Back to Top