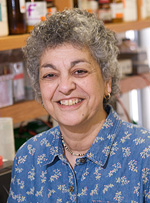 Research Interests
Our research interests are focused broadly on the molecular pathways governing cellular growth control and their disruption during the initiation and progression of human cancers.

Description of Research
Currently, one focus of investigation centers on the role of the p53 tumor suppressor gene in mediating programmed cell death (apoptosis). This gene governs a major pathway protecting human cells from malignant transformation, and it represents the most frequently mutated gene in human cancer. It is generally accepted that disruption of p53's apoptosis function directly contributes to tumor progression. Thus, understanding the mechanisms by which p53 acts in the execution of cell death pathways is of considerable importance in cancer biology. Clearly established is p53's role as a nuclear transcription factor with the ability to activate, or repress, the expression of many genes. Accumulating data, however, now reveal that p53 has a direct cytoplasmic role at mitochondria in activating the apoptotic machinery. We have obtained several key pieces of evidence supporting this conclusion. Ongoing efforts are aimed at defining the overall contribution of this non-canonical role of p53 to apoptosis induction, and identifying other cellular factors that help to regulate this pathway. As part of these efforts, we are identifying mitochondrial p53-interacting proteins. Utilizing affinity chromatography and mass spectrometry, for example, we uncovered an interaction between p53 and the mitochondrial protein BAK. BAK is a critical "gatekeeper" of mitochondrial integrity and regulator of cellular cell death pathways. When p53 binds to BAK, it triggers a conformational change in BAK, leading to BAK oligomerization. This, in turn, activates the mitochondrial apoptosis pathway. These data support the importance of BAK as a mediator of p53's mitochondrial function. Ongoing studies are aimed at identifying and characterizing other critical cellular factors that act to inhibit or promote p53-mediated apoptosis, including its role at mitochondria.

Another major focus of our research centers on the multifunctional, stress-inducible, molecular chaperone called HSP70. This protein has a key cytoprotective role in a broad range of activities that promote protein homeostasis, including the targeting of potentially toxic proteins for proteolysis. Cancer cells experience high levels of protein-modifying- and metabolic-stresses and seem to be particularly dependent on the various actions of HSP70 for survival. This phenomenon, referred to as "non-oncogene addiction", suggests that it may be possible to target such critical survival proteins for the development of therapies aimed at the selective killing of neoplastic cells. We have recently identified a small molecule that interacts selectively with HSP70, and leads to a disruption of the association between HSP70 and several of its co-chaperones and substrate proteins, including p53. Treatment of cultured tumor cells with this drug promotes cell death that is associated with protein aggregation, impaired autophagy, and inhibition of lysosomal function. Moreover, this small molecule is able to suppress tumor development and enhance survival in a mouse model of lymphomagenesis. Thus the discovery of this new reagent represents a valuable tool to advance basic investigations on the varied activities of the HSP70 protein, and also should have application in the development of effective therapies aimed at simultaneously disabling multiple cancer-critical biological processes. Together with other lines of investigation, these studies promise to provide new insight concerning critical determinants of growth control in normal and transformed cells and have implications for cancer treatment.

back to top
Last updated: 10/15/2020
The Trustees of the University of Pennsylvania
Back to Top