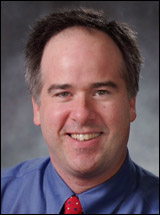 During fellowship training, Dr. Sims completed a Masters Degree in Clinical Epidemiology at the University of Pennsylvania, studying the functional consequences of secondary pulmonary hypertension in patients with severe COPD. After completing his fellowship training, he went on to be the principal investigator of a K23 award from the NIH/NHLBI investigating surfactant protein D as a modulator of lung inflammation and COPD pathogenesis. In addition, he has been actively involved in multiple clinical and translational studies of biomarkers and novel therapies for COPD as well as bronchoscopic treatments for severe emphysema. In 2013, Dr. Sims redirected his career to focus on the clinical care of advanced COPD, and now serves as the Clinical Director of the Penn COPD Program.

back to top
Last updated: 02/03/2021
The Trustees of the University of Pennsylvania
Back to Top