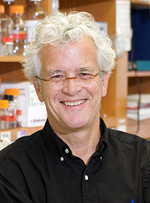 Research Interests
Notch signaling and the transcriptional regulation of cellular differentiation and transformation.

Description of Research
Stem cells possess the capacity to both self-renew and differentiate into defined lineages. Satellite cells are stem cells of skeletal muscle that normally reside adjacent to muscle fibers. Upon muscle injury they proliferate and then a subset differentiate to form addition fibers, thus repairing the damage while maintaining the stem cell niche. Our long-standing interest in the Notch signaling pathway has led us recently into the study satellite cells since it is now known that Notch controls the propensity of these cells to either proliferate (Notch signaling on) or differentiate (Notch signaling off).

Notch signaling is generally viewed as a transcriptional cascade, with Notch itself functioning both as a receptor, poised at the plasma membrane, and as a transcription factor generated by proteolysis of the receptor after ligand engagement. Several of the gene targets of Notch are themselves transcription factors that control the expression of genes further downstream in the overall pathway. However, these more distal components of the pathway, and how they link Notch signaling to its phenotypic effects, are not well understood. A major goal of the lab is to identify the components of the Notch pathway that lead to the inhibition of satellite cell differentiation. Indeed, our current data support the presence of two arms — one that promotes proliferation and another that functions through the transcriptional repressor HRT1— that combine to elicit Notch’s overall effects.

Additional projects in the lab also focus on pathway building, but involve the study of Notch in two other cells types, Schwann cells and adipocytes. For the case of Schwann cells, which generate the myelin sheath that protects nerves of the PNS, we’ve shown that constitutively active Notch (the proteolytically cleaved form) functions as an oncogene, inducing cells to actually de-differentiate and become non-responsive to cell-cell contact. For adipocytes, which produce triglycerides, fatty acids and lipids (i.e. fat), we’ve shown that Notch signaling, through the activation of the transcriptional repressor Hes-1, blocks differentiation. The theme that runs through all three areas of study is the ability of Notch to maintain cells in an undifferentiated state. Our studies aim to determine ultimately if this is coincidental or tied to a shared signaling mechanism.

Rotation Projects for 2006-2007
Various aspects of the aforementioned studies.

back to top
Last updated: 03/15/2007
The Trustees of the University of Pennsylvania
Back to Top