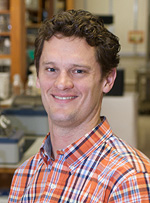 The Murray lab aims to understand how the genome orchestrates animal development at single cell resolution. This process is regulated in large part by transcription factors and signaling pathways whose function is conserved from humans to invertebrates. Misregulation of developmental gene expression is a feature of cancer and other diseases, and mutations regulatory elements are common in human genetic diseases. We employ the nematode worm Caenorhabditis elegans embryo as a model to study developmental gene regulation because of its invariant, fully enumerated lineage, ease of experimentation, and because many worm regulators are conserved with vertebrates. We combine powerful imaging-based experiments with genomics and computational tools to determine gene expression patterns across the entire embryo at single cell resolution, crucial because cells within a tissue are often heterogeneous. Our current goals are:

We developed lineage tracing methods that allow us to quantitatively determine gene expression at single cell and ~1 minute temporal resolution for essentially all embryonic cells and at high throughput. We have continued to improve and refine methods for cell tracking and expression analysis in embryos (Bao et al 2006, Murray et al 2008, 2012, Richards et al 2013).

Using this approach we have defined the complete expression of >200 transcription factors (Murray et al 2012, Araya et al 2014, unpublished data). We are active in developing a genome-scale analog to this strategy; we have developed computational (Burdick and Murray 2013) and experimental (Burdick et al submitted) RNA-seq methods to identify lineage-specific expression genome-wide. We are currently using single cell RNA-seq approaches to bring this to single cell resolution. When integrated with genomic data on chromatin state and transcription factor occupancy, this will allow us to define regulatory relationships for all genes and cells.

A major rationale for constructing a gene expression atlas is that a gene’s expression pattern can predict its function. We have tested this by developing our imaging methods for cellular resolution mutant phenotyping using this to examine the development of transcription factor mutants. We identified broad roles for several conserved transcription factors (Walton et al, 2015, Abdus-Saboor et al, 2012, our unpublished data). We have identified separable roles for these factors in fate specification, cell cycle timing, and cell migration (Walton et al, 2015). We are currently working to identify factors and factor combinations necessary and sufficient for fate specification in targeted sublineages. This work will ultimately define the rules by which combinations of DNA-binding transcription factors regulate fate, and allow us to predict which are likely to cooperate in other cells and organisms.

Development of C. elegans embryos is remarkably robust; each individual undergoes an identical pattern of cell divisions and migrations across a wide range of temperatures, from 15°C to 25°C, despite a 2-fold difference in overall developmental rate between these temperatures. We showed that not only is C. elegans development essentially identical across this range of temperatures, but that even its variability is constant. In contrast, a single degree increase above the “normal” growth range (to 26°C) causes dramatic increases in developmental variability (Richards et al, 2013). One mechanism that could explain this robustness is coordination between the cell cycle and gene expression. Indeed, we found that the timing of gene expression is highly correlated with cell cycle phases in healthy worms. However, genetic perturbations specific to the cell cycle can decouple gene expression from the cell cycle, indicating that this these genes’ timing does not depend directly on the cell cycle, suggesting the existence of other mechanisms (Nair et al, 2013).

Transcriptional regulators are often reused in different times and places within multicellular organisms, whether worm, fly or human, to regulate different targets and cell fates, yet how this context-specific regulation is encoded in the genome is not well understood. We identified almost 20 essential transcription factors regulated by the highly conserved Wnt pathway through the transcription factor POP-1/TCF (Murray et al 2012, Zacharias et al, 2015). Since these targets are expressed in different Wnt-signaled cells, they provide an excellent system in which to identify mechanisms of context specificity. Our quantitative analysis of these genes’ expression in Wnt pathway mutants showed that this pathway is required for activation of some targets but repression of others. Furthermore, we identified a novel transmitotic memory of Wnt pathway activity that appears to contribute to context-specific regulation (Zacharias et al, 2015). Using our well-defined models, we will be able to determine the rules that govern the combinatorial action of transcriptional regulators, which can then be extended to vertebrates.

back to top
Last updated: 08/30/2022
The Trustees of the University of Pennsylvania
Back to Top