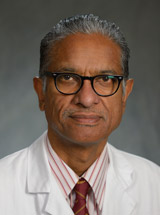 
Jan 1993-Mar 1999: In Johannesburg, I set up a molecular pathology laboratory utilising DNA in situ hybridisation, immunohistochemistry and PCR technology. This was funded by the SAIMR, MRC and NCA. Staffed with two full time senior technologists and one scientist, residents and attendings were involved in translational research. See abstracts and publications). I also set up the use of PCR (as an MMed project) for the investigation of lymphomas using gene rearrangements. This is now used as a routine investigation in this department. PCR technology for the detection of mycobacteria and HHV-8 is used for both research and diagnosis in paraffin sections. Several collaborative studies have been conducted with groups in the UK and USA (see publications).


May 1999-Present: In Burlington, Vermont, the Division of Experimental Pathology was created under my headship with two PhD scientists and two technicians. Pathology attendings and residents use this facility to engage in translational research. Collaborative projects have also been developed with Gyn Oncology, Otolaryngology and the Vermont Cancer Center. Aspects of my own research in HPV-associated cervical neoplasia continue to be investigated in this laboratory. These efforts are funded by the Vermont Cancer Center and Fletcher Allen Health Care.


An HPV Working Group comprising experts from various areas was also conceived with the view to educating high school teachers and children about the potential consequences of cervical HPV infections. Programs and presentation packages have been distributed with an enthusiastic reception.

back to top
Last updated: 07/14/2020
The Trustees of the University of Pennsylvania