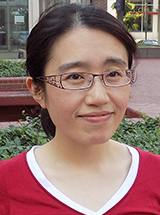 I have a broad background in biochemistry (enzymology), biophysics (biophysical spectroscopy and X-ray crystallography), nucleic acid biology, molecular biology, and cell biology. My laboratory is interested in (1) the mechanisms and consequences of the interplay of multiple RNA modifications in mRNA, tRNA, and rRNA, particularly with regards to their impacts on human disease, and (2) how epitranscriptomics contributes to sex-biased human physiological and pathological processes.

In my Ph.D. study, I carried out biochemical and biophysical characterizations of a human nuclear metalloprotein with previously unknown function and identified its roles in gene expression regulation in a redox-dependent manner. Also, my graduate work on the structure-function relationships of enzymes in the tryptophan-kynurenine pathway facilitated the understanding of the mechanistic enzymology of NAD+ biosynthesis. I developed a wide range of expertise in enzymology and biophysics through the studies of mechanistic enzymology, especially in stopped-flow UV-vis, EPR, and Mössbauer spectroscopic characterizations and time-lapse crystallography snapshots of the catalytic cycle intermediates (determined 40 protein structures and deposited in Protein Data Bank). In my postdoctoral training, I become interested in studying the functions of RNA modifying enzymes and RNA binding proteins in neuronal development and energy metabolism regulation. My major contribution during this period was the identification of the first transfer RNA (tRNA) demethylase enzyme (i.e., an eraser of the modification) and elucidation of an unprecedented translational regulation mechanism through enzyme-mediated tRNA demethylation. This finding, together with the previously identified reversible regulation of mRNA modifications, collectively led to the notion that methyltransferase and demethylase enzymes reversible controls the methylation status of multiple RNA species.

I aim to combine my knowledge of enzymology, biochemistry, spectroscopy, structural biology, and RNA biology to address fundamental research questions that how dysregulation of RNA binding proteins and RNA modifying enzymes contribute to neurological disorders. In addition, my lab has a long interest in the sex-specific features in the physiology and pathology in the neuronal system.

back to top
Last updated: 11/14/2020
The Trustees of the University of Pennsylvania
Back to Top