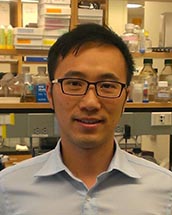 My research aims to improve our understanding of the synucleinopathies, a group of neurodegenerative disorders that include Parkinson’s disease (PD), dementia with Lewy bodies (DLB) and multiple system atrophy (MSA). PD is a progressive neurodegenerative condition that affects over 1 million individuals in the U.S. alone, and for which there is currently no cure. Lewy bodies are also found in nearly half of all Alzheimer's disease patients examined at autopsy.

1) The Role of Protein Misfolding in PD and Related Synucleinopathies: Histopathological, genetic, and experimental evidence suggest that the aggregation and accumulation of alpha-synuclein (α-Syn), the primary component of Lewy bodies, underlies the symptoms seen in PD. We previously demonstrated that aggregated forms of α-Syn are transmissible entities that propagate and spread throughout the brain in a manner akin to prion diseases. This exciting discovery represents a significant shift in our understanding of PD etiology and progression. Through the development of novel biophysical, cell-based and animal models, my work seeks to identify factors that a) regulate α-Syn expression and misfolding, b) determine its route of transmission and c) modulate the toxicity of α-Syn pathology.

2) Novel Therapeutics Against Synucleinopathies: Present PD treatments provide temporary relief to motor impairments but do not alter the neurodegenerative process. In collaboration with UPenn’s Center for Neurodegenerative Disease Research Drug Discovery group, our team has been developing high-throughput screening assays to identify small molecules and biologicals that inhibit the accumulation and transmission of abnormal α-syn species or neutralize their action.

3) Biology of Midbrain Dopamine Neurons: PD is primarily a movement disorder that results from the loss of dopamine-producing neurons in the midbrain. The reasons why this subpopulation is particularly vulnerable in PD is unclear. By characterizing the pathways that govern their development and maintenance, we and others have shown that a susceptible dopamine cells are defined by specific transcription factors that regulate their survival in adulthood. More recently, we have also examined the mechanisms underlying the selective vulnerability in other non-dopamine neuron subpopulations.

This research is conducted by a talented and dedicated team of research specialists, postdoctoral researchers, and students. We are regularly in search of new members.

back to top
Last updated: 06/18/2020
The Trustees of the University of Pennsylvania
Back to Top